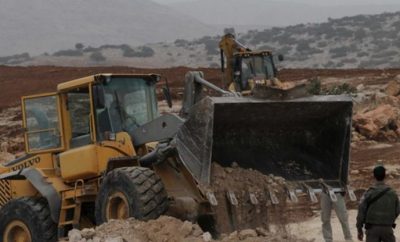 Israeli soldiers, accompanied by a number of armored bulldozers, invaded Thursday the at-Tass area, west of Kharas town, west of the southern West Bank city of Hebron, before bulldozing and uprooting 40 Dunams (9.88 Acres) of Palestinian lands.

Abdul-Fattah Qodeimat, the head of Kharas Local Council, told the Maan News Agency that the lands were planted with almond and olive trees.

He added that the soldiers also demolished several water wells in the invaded and uprooted lands, and that the wells belong to the families of Qodeimat, Halahla and Sa’id.

The official denounced the Israeli violations, and said that the soldiers are trying to force the Palestinians out of their lands, in order to build and expand the illegal Jewish-only colonies.

It is worth mentioning that, on Wednesday, the army invaded and uprooted 36 Dunams (8.89 Acres) near Kharas.

In related news, the Palestinian Prisoners Society (PPS) said that Israeli soldiers have kidnapped, on Thursday at dawn, thirty-six Palestinians, including several children, in different parts of the West Bank at dawn.