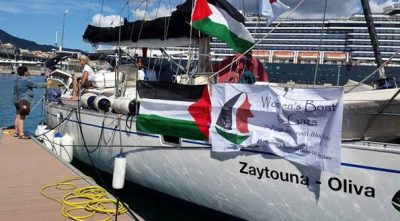 PCHR also denounces the international silence towards the Israeli crimes, especially the 9-year closure imposed on the Gaza Strip and repetitive piracy against peace activists in the Mediterranean.

In a statement issued by the organizers, “The boat was forcibly stopped against the will of its captain and participants on board.  Women were taken to a detention center instead of their original destination.  Thus, despite of not using physical violence, we cannot say that what happened to the boat was a non-violent interception.”

It should be mentioned that a group of international female activists launched an initiative to set out 2 boats (Zaitounah and Amal) to the Gaza Strip, which has been under closure since 2007, in an attempt to break that closure imposed on 2 million persons.

On 23 September 2016, the boat manned by 13 female parliamentarians, public figures and peace activists from 10 different countries was launched from Messina Port in Sicily.  Moreover, another boat namely “Amal” was supposed to catch up with al-Zaitounah, but it was delayed due to logistic reasons according to statements by the organizers.

Before the boat reached the Gaza territorial waters, the Israeli Naval Forces surrounded it while sailing within the international waters and took it to Ashdod Port.

The activists were then taken to a detention center; some of them were deported while the rest have been so far under detention.

According to a statement issued by the organizers on Thursday, the organizers are concerned that the detention will continue for a couple of days like what had happened to previous activists.

According to the captain’s statement to media and a statement issued by the organizers, at approximately 16:00 (Italy’s local time), on Wednesday, the Israeli Navy troops raided the boat.

Two navy ships approached the boat from both sides when it was in the international waters, not too far from Gaza territorial waters. The ships released four gunboats towards the boat.

The Israeli soldiers demanded the captain to sail towards Ashdod Port, but she refused and confirmed their presence in the territorial waters. She also informed the Israeli soldiers that they had no right to change in the course of the boat.

It should be noted that the Israeli Navy intercepted several boats that attempted to reach the Gaza Strip in solidarity with Palestinians, break the closure and deliver aid.

The last one was “Marian” which was intercepted by the Israeli forces on 29 June 2015. Furthermore, Israel has intercepted about 12 boats attempting to reach the Gaza Strip shores at different intervals since 2008, the most prominent of which was Freedom Flotilla (1).

The Israeli forces killed then 10 activists, who were on board of “Mavi Marmara” Ship (the biggest of the Freedom Flotilla ships), after forcibly seizing control over the ship.

It should be noted that the Gaza Strip has been witnessing a clear deterioration of basic human rights sue to the serious and long-term impacts of the Israeli closure suffocating the Gaza Strip since 2007.

This constitutes a collective punishment against all of the Gaza Strip population and an obvious violation of their rights, especially the rights to movement and to an adequate standard of living.

These impacts has contributed to increasing the rates of poverty, unemployment and families suffering from food insecurity and lack of adequate housing.

This coincides with the impacts of the frequent Israeli attacks on the Gaza Strip, the latest of which was in 2014 that resulted in the destruction of the infrastructure and many houses and their owners cannot rebuild them yet because of the Israeli restrictions imposed on the entry of construction materials into the Gaza Strip.

PCHR underscores that the attack on Zaitouna Boat constitutes a crime to be added to the long list of war crimes and crimes against humanity committed by Israeli; and

1.      Calls upon peace and human rights activists around the world to pursue their attempts to break the illegal closure and unveil the Israeli crimes and international silence;

2.      Demands the international community to practice pressure on Israel to promptly release the activists, end the closure imposed on the Gaza Strip and offer decent life to the Palestinian civilians; and

3.      Calls upon the UN Secretary-General to condemn the attack on Zaitouna Boat.