Army Kidnaps Five Palestinians, Injures Many Others In Jerusalem 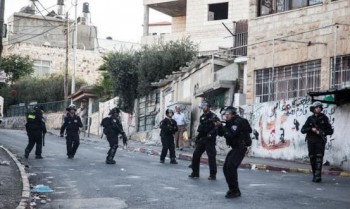 The two kidnapped Palestinians, Gheith Abu Haidar and Mohammad Sharifa, were severely beaten by the soldiers before being the soldiers took them to an interrogation center in Jerusalem.

Silwanic added that the soldiers invaded the al-‘Eesawiyya town, in Jerusalem, and kidnapped three Palestinians, one of them has been identified as Samir ‘Obeid.

Mohammad Abu al-Hummus, member of the Follow-Up Committee in al-‘Eesawiyya, said the soldiers fired many rubber-coated steel bullets, and gas bombs, causing many Palestinians, including an elderly woman in her own home, to suffer severe effects of tear gas inhalation.