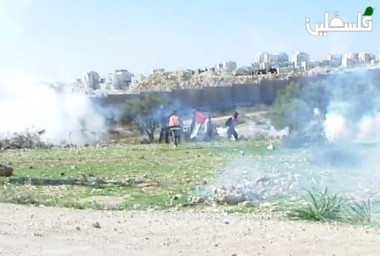 The sources said three residents were shot with rubber-coated steel bullets, and dozens suffered severe effects of tear gas inhalation, in the Shuhada Street, east of the city, after the soldiers invaded it.

Dozens of soldiers first surrounded the town before invading it, and fired many gas bombs, concussion grenades and rubber-coated metal bullets.

The Israeli gas bombs also caused many Palestinians, including children, to suffer the effects of tear gas inhalation after the soldiers fired several gas bombs at homes in the town.

|Army Kidnaps Five Palestinians, Injured Many Others In Jerusalem|