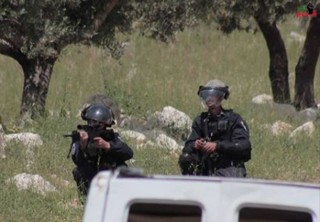 Medial sources have reported, Friday, that dozens of residents suffered the effects of tear gas inhalation, after Israeli soldiers invaded the village, and attacked the weekly protest against the Annexation Wall and colonies.

Coordinator of the Popular Committee in Kafr Qaddoum Morad Eshteiwy, said the soldiers used excessive force against the protesters, and fired dozens of gas bombs on them, in addition to spraying the protesters and many homes with waste-water mixed with chemicals.

Local medics provided many Palestinians with the needed treatment for the effects of tear gas inhalation. 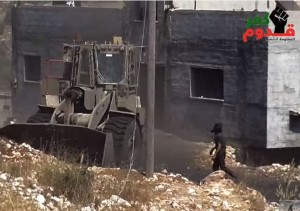 The Israeli military attack led to clashes with dozens of youngsters, who hurled stones and empty bottles on the invading soldiers.

The protesters also carried pictures of Palestinian detainees held by Israel, chanted for their release, an end to Israel’s ongoing occupation and violations, and the liberation of Palestine.

In addition, waste-water used by soldiers flooded many homes in the village, causing excessive damage.

It is worth mentioning that the army installed many roadblocks around the village, since early morning hours, and declared it a closed military zone.

The Palestinians in Kafr Qaddoum have been holding weekly protests against the Annexation Wall, and colonies, and demanding the military to reopen the main village road that the army closed more than 13 years ago, to enable easy access to Israeli colonizers driving to and from the nearby illegal colony of Kedumim, built in villagers’ lands.