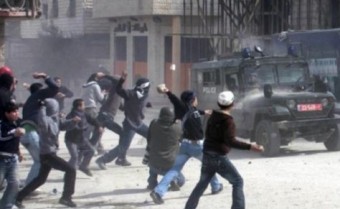 Medical sources in Hebron, in the southern part of the occupied West Bank, have reported on Friday evening, that one resident suffered a serious injury after an Israeli soldier shot him, in the al-‘Arroub refugee camp, north of the city.

The sources said a young Palestinian man was shot with a live round, and suffered a serious injury, before local medics rushed him to hospital.

Eyewitnesses said clashes took place in the area, and that the soldiers fired many gas bombs at the protesters, and many nearby homes, causing dozens of residents to suffer the effects of tear gas inhalation.

In addition, another Palestinian, identified as Mohammad Nidal Abu Ghazi, was injured after an Israeli army vehicle rammed him at the main entrance of the al-Arroub refugee camp, in Hebron.

Clashes took place in the area, and that the army fired dozens of gas bombs on the protesters and many nearby homes, causing scores of residents to suffer the effects of tear gas inhalation.