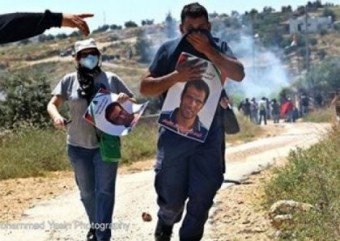 Israeli soldiers attacked, Friday, the weekly nonviolent protest against the Annexation Wall and colonies, in Bil’in village in the central West Bank district of Ramallah, causing dozens of protesters to suffer the effects of tear gas inhalation.

This week’s protest comes in commemoration of the seventh anniversary of the death of Bassem Abu Rahma, a nonviolent activist who was killed, in April of 2009, after a soldier shot him in the chest with a high-velocity gas bomb.

Dozens of soldiers surrounded the village and attacked the protesters by firing dozens of gas bombs, concussion grenades and rubber-coated steel bullets, causing scores of residents to suffer the effects of tear gas inhalation.

Medical sources said that the children of resident Ashraf al-Khatib suffered severe effects of tear gas inhalation after the soldiers fired gas bombs at their home.

The protesters marched from the center of the village, carrying Palestinian flags and posters of Bassem Abu Rahma, while chanting for national unity, the release of all political prisoners and the liberation of Palestine.

|Related: Israeli Court Decides Not To File Charges Against Soldier Who Killed Nonviolent Protestor in Bil’in|

Coordinator of the Popular Committee in Bil’in, Bassem Abu Rahma, said the Palestinians, along with Israeli and international solidarity activists, will continue their legitimate struggle against the occupation, oppression and violations.

He added that the Israeli government of Benjamin Netanyahu is escalating its violations against the Palestinian people, including the children, their homes and lands, and is ongoing with the illegal annexation of agricultural lands.

Abu Rahma also said Israel is determined to continue its crimes, including the demolition of homes, and the forced
displacement of the Palestinian people, in order to build and expand its illegal colonies in occupied Palestine.