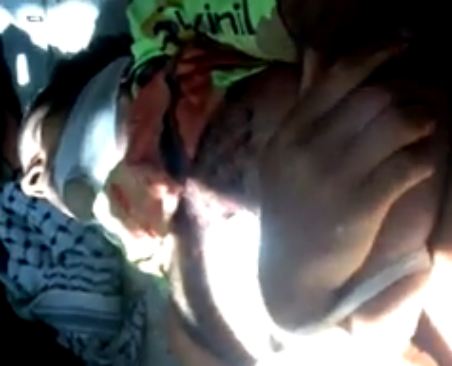 Despite a video clearly showing the death of Bassem Abu Rahma, who was shot in the chest by a gas bomb, an Israeli court decided Thursday that the killing that took place during a nonviolent protest against the Annexation Wall in Ni’lin near Ramallah, was not intentional. The brother of Abu Rahma slammed the decision and said it comes to give the soldiers more chances to continue the killing of innocent, nonviolent protestors.

The soldier will not face any charges, and will be allowed to resume his military service as if nothing happened.

Bassem Abu Rahma, 31, was killed in April of last year. Israeli and International peace activists were also at the scene.

The Israeli army claimed that Abu Rahma and other protestors were throwing stones at the soldiers, yet the video footage clearly shows him shouting at the soldiers asking them not to open fire. “rega, rega, catzin” the Hebrew words Abu Rahma told the soldiers… “officer… officer… wait.. wait..”.

The Israeli court disregarded the facts and decided to close all investigations in the issue, and decided that the gas bomb fired by the army was not intentionally aimed at Abu Rahma.

This decision disregarded the fact that the soldiers did not have to open fire at the protestors to start with as they were not under attack, and the nonviolent protestors were on the other side of a barbed-wire fence installed by the army.

Bil’in in the scene of weekly nonviolent protests against the illegal Israeli Annexation Wall and settlements. Israeli and International peace activists join the residents in their protests in Bil’in and in several other Palestinian villages in the West Bank.

Ashraf, the brother of Bassem, said that the court’s decision does not surprise him, and added that “Israel’s Justice System provides cover for the soldiers to continue their crimes”.

In July of 2008, Ashraf was detained by Israeli soldiers during a nonviolent protest in the nearby village of Ni’lin, and after he was cuffed and blindfolded a soldier, standing next to him, pointed his gun at his leg and shot him with a rubber-coated bullet.

The shooting of Ashraf was also caught on tape by a young Palestinian girl. Israeli soldiers kidnapped her father later on as a punishment just for exposing the crime.

Commenting on his brother’s death, Ashraf said that hundreds witnessed the attack, and heard Bassem call out to the soldier asking him to hold his fire, but the soldier shot him while he was only six meters (nearly 20 feet)away.

Ashraf stated that the family will file an appeal to the Israeli High Court of Justice, and should it also fail to achieve justice, the family would resort to the International Court.

The army insists that the soldiers did not commit any violation, and that the decision was made after examining all related details.

The Shooting of Ashraf Abu Rahma