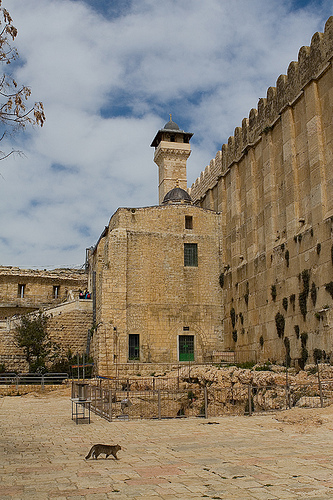 Several thousand right-wing settlers and their supporters poured into the Palestinian city of Hebron Thursday and declared the site of the Ibrahimi mosque to be a part of the land of Israel. They held a celebration in the mosque, which is also the site of a 1994 massacre by Israeli right-winger Baruch Goldstein who killed 29 Palestinians praying. The celebration was in support of the Israeli government’s decision to declare the site a ‘national Israeli heritage site’, despite the fact that it is located well within Palestinian territory.One right-wing Israeli Member of the Knesset (Parliament), Ayoob Kara, told the crowd, ‘The masses that have come here, including the 40 members of the Land of Israel caucus, are a guarantee and proof that no one will move us from the Cave of the Patriarchs, not even Hussein Obama.”

Kara was referencing the recent call by US President Barack Obama (whose middle name is Hussein) for a four-month settlement freeze during which peace talks between Palestinian and Israeli leaders could resume.

Another speaker at the rally, MK Gila Gamliel, made the incendiary claim that Jerusalem has always been the capital of Israel , and that Hebron is also a part of Israel. Both cities are on Palestinian land, and any Israeli claim to these cities and other Palestinian land are in direct violation of international law.

Israeli soldiers moved into the city to accompany the invading settlers and their supporters. They claim that one Israeli woman was injured by a stone thrown at the invading Israelis by Palestinian youth.