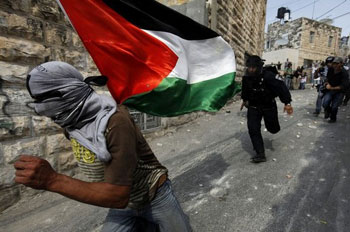 The Israeli Police attacked on Thursday Wadi Hilwa Media Center, in Silwan’s Wadi Hilwa neighborhood, in occupied East Jerusalem, and violently attacked employees and visitors, leading to several injuries, the Palestine News Network (PNN) reported.Fakhri Abu Diab, head of the Committee for Defending the Lands and Properties of Silwan, said that Jawad Siyam, head of the center was wounded in his shoulder and back, while employee Ramadan Al Banna, and resident Ahmad Al Natsha suffered eye injuries, while two women, visiting the center, were violently pushed around by the police.

The police also kidnapped Yazan Siyam, 14, while he was at the center and violently attacked his younger brother, Ali, as he followed the soldiers crying, while they dragged his brother.

Abu Diab slammed the Israeli attack, especially since the soldiers were accompanied by extremist Jewish settlers.

Speaking from his hospital bed at the Al Makassid Hospital in East Jerusalem, Jawad Siyam, said that the attack is “barbaric” , and that when he asked the police about a warrant, the police and the settlers said “we are the law here, nothing is above us”, and started attacking and insulting every person who was there.

Khalad, Mohammad and Hammouda were released on bail, while the remand of the Sa’id and Daoud was extended until Sunday for further interrogation.

Abu Diab stated that Silwan is subject to frequent Israeli military and settler attacks, and that the provocative acts of the police and fundamentalist settlers are meant to terrify the residents to force them out of their homes and lands.