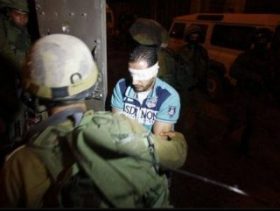 Israeli soldiers kidnapped, on Friday at dawn, four Palestinians from the West Bank districts of Bethlehem and Salfit. Five Palestinian cars sustained damage after being attacked by Israeli colonizers, near Ramallah.

The Bethlehem office of the Palestinian Prisoners Society (PPS) has reported that the soldiers kidnaped Jamil Suheil Hamamra, 22, in the al-Walaja village, northwest of Bethlehem.

The PPS added that Hamamra is from Husan village, west of Bethlehem, and was staying overnight in al-Walaja.

In addition, the soldiers kidnapped Marwan Salim Mousa, from the al-Khader town, south of Bethlehem, allegedly for entering Jerusalem without a permit.

In related news, at least five Palestinian cars sustained damage after a number of extremist Israeli colonizers hurled stones on their cars, driving on the main road near Ofra illegal colony, built on Palestinian lands, northeast of Ramallah.