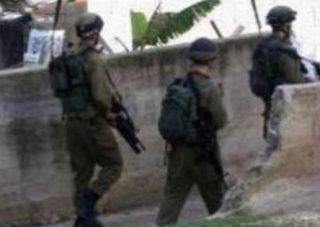 The Palestinian Prisoners Society (PPS) said that Israeli soldiers have kidnapped, on Sunday at dawn, four Palestinians in the West Bank districts of Tulkarem, Jerusalem and Hebron, after invading their homes, and took them to interrogation centers.

The Tulkarem office on the PPS, in the northern part of the West Bank, said the soldiers invaded the city, searched a number of homes and kidnapped a Palestinian man, identified as Hatem Sharif Abdul-Latif, 52.

In Jerusalem, the soldiers kidnapped a child, identified as Fadi Shalloudi, and a former political prisoner, identified as Nour Shalabi. The Jerusalem office of the PPS said Shalloudi was held under house arrest for eight months prior to his abduction.

The PPS stated that the soldiers have kidnapped 61 Palestinians in different parts of the West Bank over the last two days, and that 30 of them are from Jerusalem, and 25 from Hebron.

Earlier Sunday, several Israeli army jeeps invaded the al-Asakra village, east of Bethlehem, and summoned Khaled Mohammad Asakra, in his forties, for interrogation in the Etzion military base and security center.

The PPS said al-Asakra was a former political prisoner who was held by Israel for more than twenty years.