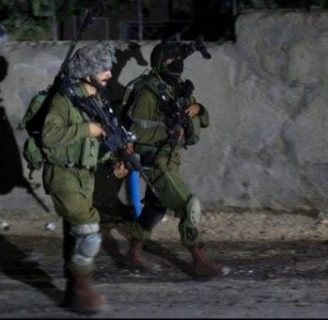 The Palestinian Prisoners Society (PPS) has reported that Israeli soldiers invaded, on Monday at dawn, various districts in the occupied West Bank, searched many homes and kidnapped at least fourteen Palestinians.

The soldiers broke into dozens of homes, and searched them, causing property damage, in addition to interrogating many Palestinians.

They also conducted military searched in Palestinian lands, around Ya’bad town, near the northern West Bank city of Jenin, after the army said several shots were fired on a military pose, near Mabo Dothan colony.

The kidnapped Palestinians have been identified as: