Jerusalem Family Buries Its Son Seven Months After He Was Killed 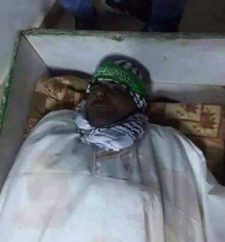 The Israel Authorities releases, on Monday at dawn, the body of a Palestinian who was shot and killed by the soldiers, on November 10 2015, and only allowed a limited number of family members to participate in the funeral ceremony and burial, in Jerusalem.

The Palestinian, Mohammad Abed Nimir, 37, from the al-‘Isawiyya town in Jerusalem, was buried at the Mujahidin Graveyard, in Salaheddin area, in occupied Jerusalem.

Nimir was fatally shot on November 10 of last year, after the soldiers alleged he attempted to stab them, while eyewitnesses denied the claims.

After being prevented from participating in the funeral ceremony, many Palestinians and relatives gathered near Salaheddin Street, before the soldiers attacked them to force them away.

Dozens of soldiers and mounted police were deployed near Bab al-Sahera (Herod’s Gate), and sealed various streets and neighborhoods until the funeral ceremony was concluded in early morning hours.

Israel only allowed 30 persons to participate in the funeral ceremony, and prevented them from using their mobile phones, after forcing the family to pay 20.000 Shekels to guarantee the implementation of these preconditions.

Nimir’s father said Israel deliberately tortured the family by refusing to release its son’s body for burial, since he was killed in the al-Misrara Street in Jerusalem, six months ago.

“Israel imposed very tough restrictions, and preconditions, before allowing us to conduct the burial ceremony,” the father said, “But we want to burry our slain son, to let him rest in peace, and now Jerusalem’s soil is embracing him.”

Lawyer Mohammad Mahmoud of the Ad-Dameer Prisoner Support and Human Rights Association, said Israel started the process of releasing the corpses of many slain Palestinians, after the Supreme Court held a session, last Thursday, and recommended their release.

Mahmoud added that the Israeli Authorities removed Nimir’s body from the fridge 48 hours prior to releasing it, in contrary to previous incidents when the remains of slain Palestinian were released while still frozen.

The lawyer also said he believes Israel will release the corpses of the remaining eleven slain Palestinians in the coming few days, as the Israeli court ordered their release before the Muslim Month of Ramadan.

Israel is still holding the remains of 13 Jerusalemite slain Palestinians;