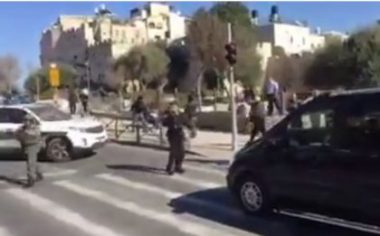 Israeli sources have reported, Tuesday, that two elderly Israeli women were injured in a park, in Jabal al-Mokabber Palestinian town, in occupied Jerusalem, after being stabbed by two masked young men who managed to escape before the soldiers installed many roadblocks and pushed more units.

Israeli daily Haaretz said the two women, in their seventies and eighties, were stabbed in Armon Hanatziv colony, and that the two went for a walk, along with three other adults, before being attacked by two masked men.

Israeli sources said the soldiers arrested a young Palestinian man, suspected of attacking the women, while other sources said he allegedly “carried scissors, and attempted to attack young Israeli women, near Jabal al-Mokabber.”

The WAFA Palestinian News Agency said a large Israeli military force closed many roads in Jabal al-Mokabber, and took the detained Palestinian to an interrogation center, allegedly for involvement in the stabbing attack in Armon Hanatziv colony, illegally built on Palestinian lands.