Army Kidnaps Seven Palestinians In Bethlehem, One In Jenin 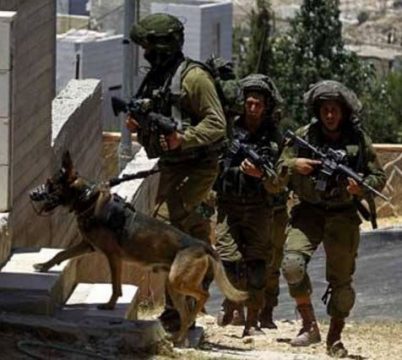 Dozens of Israeli soldiers invaded, on Monday at dawn, the towns of al-Khader and Beit Fajjar, in the West Bank district of Bethlehem, searched and ransacked many homes, and kidnapped seven Palestinians. The army also broke into several homes in Hebron. One Palestinian was kidnapped near Jenin at night, Sunday.

The soldiers surrounded the al-Khader town before invading it, stormed and searched many homes, and interrogated several Palestinians.

In addition, the soldiers kidnapped one Palestinian, identified as Eyad Ahmad Taqatqa, 20, from his home in Beit Fajjar.

Eyewitnesses said the soldiers invaded the town through its eastern and western parts, and were extensively deployed around the Red Mosque, before storming and searching several homes.

In related news, the soldiers stormed and searched many homes in Shiokh al-‘Arroub town, northeast of Hebron, and installed many roadblocks on main roads leading to Sa’ir and Halhoul towns, in addition to Hebron’s northern entrance.

The soldiers stopped many cars and searched them, and investigated the ID cards of dozens of Palestinians, while questioning many of them.

Furthermore, the Palestinian Prisoners’ Society (PPS) said that the soldiers kidnapped a Palestinian, identified as Raed Mahmoud Mer’ey, 22, from Sielet al-Harethiyya town, west of the northern West Bank city of Jenin, after stopping him at a roadblock, southwest of the village.

The soldiers also stopped and searched dozens of cars, and interrogated many Palestinians while examining the ID cards.