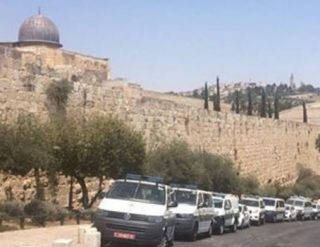 Israeli soldiers have kidnapped, on Tuesday at dawn, at least six Palestinians in different parts of occupied East Jerusalem, and took them to a number of interrogation facilities, the Wadi Hilweh Information Center in Silwan (Silwanic) has reported.

Silwanic said that the soldiers kidnapped Odai Gheith, 16, and Eyad Gheith, 16, after invading and searching their homes in Silwan town, south of the Al-Aqsa Mosque.

The soldiers also invaded Qalandia refugee camp, north of Jerusalem, and kidnapped a young man, identified as Abdul-Rahman az-Zeer, from his home.

Two Palestinians were also kidnapped at dawn, in Bab al-‘Amoud, one of the gates of the Al-Aqsa Mosque, and Hizma town, north of Jerusalem. Their names remained unknown until the time of this report.

Furthermore, the Palestinian Prisoners Society (PPS) has reported that Israeli soldiers kidnapped, on Tuesday at dawn, two Palestinians in the West Bank district of Nablus and Tubas.

In addition, the army invaded Bani Neim town, east of the southern West Bank city of Hebron, and kidnapped one Palestinian. The soldiers also delivered a demolition order to a family in the town.

Also at dawn, the soldiers invaded Beit Fajjar town and Aida refugee camp, in the West Bank district of Bethlehem, shot and injured a child, and kidnapped two young men.