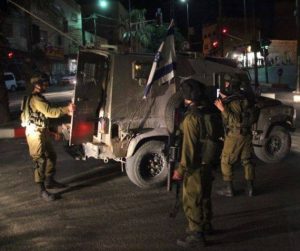 The Palestinian Prisoners Society (PPS) has reported that Israeli soldiers have kidnapped at least 30 Palestinians, including children, in different parts of the occupied West Bank, including occupied Jerusalem, in massive invasions of homes and communities, carried out overnight and on Wednesday morning.

The PPS said the soldiers stormed and violently searched several homes in the central West Bank district of Ramallah and kidnapped eight Palestinians.

In Jerusalem, the soldiers kidnapped seven Palestinians, including children, after storming and searching their homes.

In Qalqilia, also in northern West Bank, the soldiers kidnapped three Palestinians, identified as Adnan Zeid Amer, and his brother, Ezzeddin, in addition to a security officer, identified as Ma’an Mohammad Radwan.

Israeli soldiers invaded, on Wednesday at dawn, various communities in the occupied West Bank, searched homes and kidnapped at least thirteen Palestinians, including a security officer.

It added that the soldiers invaded Deir al-Hatab village, east of the northern West Bank city of Nablus, and kidnapped Husam Zeid Qassem Hussein, 22, after storming and searching his family home.

Media sources in Nablus said the soldiers invaded several homes in the Dahia area, in Nablus, after damaging their front doors, before searching them and ransacking their property.

The soldiers destroyed and removed windows and doors of the invaded homes, and damaged electric equipment.

The sources added that the soldiers closed the road leading to a local mosque, and prevented the Palestinians from reaching it for dawn prayers.

The attack led to clashes between several local youths, who hurled stones on the soldiers, and the soldiers who fired many gas bombs and concussion grenades.

The soldiers also kidnapped a young man, identified as Ahmad Awni Jaber, 30, from Ektaba area, east of the northern West Bank city of Tulkarem, after stopping him on the Za’tara roadblock, south of Nablus.

The soldiers also invaded several villages, west of Ramallah, including Ni’lin, and fired flares, in addition to gas bombs and concussion grenades, while a number of local youths hurled stones at the invading vehicles.

In addition, the Hebron office of the PPS, in the southern part of the West Bank, said the soldiers invaded Yatta, Surif and Doura towns, and Kharsa village, violently searched many homes, and kidnapped Mahmoud Khalil Abu Awad, 27, from Kharsa.

The soldiers also kidnapped a Palestinian security officer, attacked and injured another resident, in Azzoun town, east of the northern West Bank city of Qalqilia.

In addition, the soldiers kidnapped at least five Palestinians, after invading their homes and violently searching them, in the al-Isawiyya and Silwan towns, in occupied East Jerusalem.