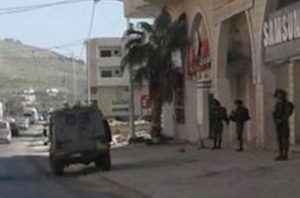 Local sources said the kidnapped children have been identified as Mohammad Anis Odah, Qussai Mohammad Odah, and Shuaib Nafez Sa’id; all are only eleven years of age.

The soldiers claimed the children participated in throwing stones on a car of an Israeli settler, driving near the main road of the town.

In addition, the army closed Huwwara and Za’tara roadblocks and prevented the Palestinians from crossing.

The soldiers said the closure was a punitive measure after some Palestinian youngsters hurled stones at Israeli cars and army vehicles.

In addition, the soldiers detained five Palestinian children from Zabbouba village, west of Jenin, in the northern part of the West Bank.

The children were playing in Palestinian lands, close to the Annexation Wall.

The soldiers interrogated the children for several hours, after initially accusing them of hurling stones on military vehicles, but released them later.