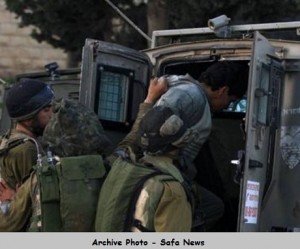 The Palestinian Prisoners’ Society (PPS) has reported that the soldiers invaded and violently searched a number of homes, and kidnapped three former political prisoners.

In addition, a large military force invaded several neighborhoods in Hebron city and Sa’ir town, north of Hebron, and withdrew later to nearby army bases.

The soldiers also installed roadblocks on roads leading to Sa’ir and Halhoul towns, and the northern road of Hebron city, before stopping and searching dozens of cars, and inspected the ID cards of the scores of Palestinians.

Also on Monday, at least eleven schoolgirls suffered the effects of tear gas inhalation, after Israeli soldiers fired gas bombs on them, in Hebron city.