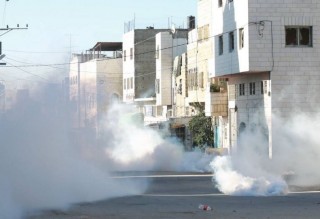 Palestinian medical sources in Hebron, in the southern part of the occupied West Bank, has reported Monday that at least eleven children suffered the effects of tear gas inhalation, after Israeli soldiers fired gas bombs on them.

The sources said Red Crescent medics provided eleven students of the Zahra’ Elementary School for Girls with the needed first aid after they suffered severe effects of tear gas inhalation.

The children were walking to school, close to the Abu ar-Reesh Israeli military roadblock, in the southern part of Hebron city, when the soldiers fired many gas bombs on them, after preventing them from crossing while on their way to school.

The Palestinians in Hebron face one of the most difficult conditions in the occupied West Bank as the soldiers blockade entire roads and neighborhoods, not just with military roadblocks, but with iron gates, metal detectors and concrete blocks, especially in areas were illegal Israeli colonists reside.

There are four Israeli colonies in downtown Hebron alone, with approximately 500 inhabitants. Around 7000 additional colonizers live in Keryat Arab’ colony, in the outskirts of Hebron city.

Many other settlements, including Givat Ha’avot, Givat Hasrina, east of Hebron, and Beit Haggai colony, south of the city, surround Hebron.