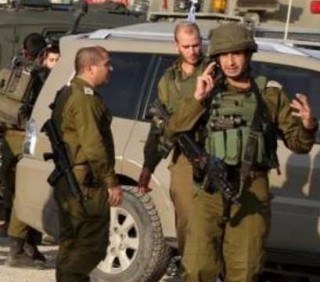 The Palestinian Prisoners Society (PPS) has reported, Monday, that Israeli soldiers kidnapped two Palestinians from the West Bank district of Bethlehem, and summoned two others for interrogation.

The PPS said the soldiers kidnapped a Palestinian worker, identified as Khaled Mohammad Salah, 38, in Wadi al-Hummus area, in the al-Khader town, south of Bethlehem, and took him to the Etzion military and security base.

Ahmad Salah, the Coordinator of the Popular Committee against the Wall and Settlements in al-Khader, said the soldiers also invaded and searched many homes and summoned two Palestinians for interrogation in Etzion.

Salah added that the two have been identified as Zein Sayel Issa, 21, and Qassem Yassin Issa, 20.

The soldiers also invaded Husan town, west of Bethlehem, and kidnapped a young man, identified as Mohammad Nash’at Hamamra, after breaking into his home and violently searching it.

In related news, at least eleven schoolgirls suffered the effects of tear gas inhalation, after Israeli soldiers fired gas bombs on them, in Hebron city.