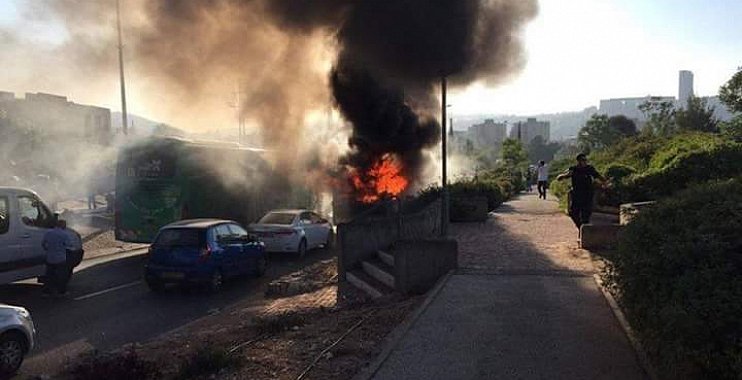 At least 21 Israelis were injured among them two in critical conditions, and six six who suffered moderate wounds, in a bus explosion near Jerusalem.

Israeli media sources said that a bomb exploded in an empty bus that also caused a second bus that had passengers, to catch on fire as the two buss drove on the main road near the Israeli settlement of Gilo separating Bethlehem area from Jerusalem.

Israeli Ynet News said the explosion took place in a bus traveling from East Talpiot towards Mount Herzl, causing it to catch fire, and that the explosion also caused fire in a nearby bus and a private vehicle.

It added that Jerusalem District Commander Toram HaLevy said that the explosion was caused by an explosion device placed in the rear part of the bus.

The Israeli news agency also said that Israeli medics provided treatment to 21 persons, including two who suffered critical wounds and six others who were moderately injured.

Israeli Police spokesperson Asaf Aharoni said the Police and security services never had any prior warning about a possible attack in Jerusalem.

Up until the time of this report, no Palestinian group claimed responsibility of the attack.

Although the Hamas movement did not claim responsibility,  its spokesperson Sami Abu Zuhri issued a press release stating that “what happened is a natural outcome of the Zionist crimes, field executions and the ongoing desecration of the Al-Aqsa Mosque, in Jerusalem.”