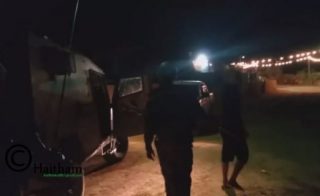 Israeli soldiers kidnapped, on Thursday at night, three Palestinians in Huwwara town, south of the northern West Bank city of Nablus, after several residents prevented a number of Israeli colonists from invading their town.

Local sources said many Palestinians intercepted the colonists, who infiltrated into their town, before the soldiers invaded it, assaulted many residents and kidnapped three of them.

The sources added that dozens of soldiers have been deployed in Huwwara and around it.