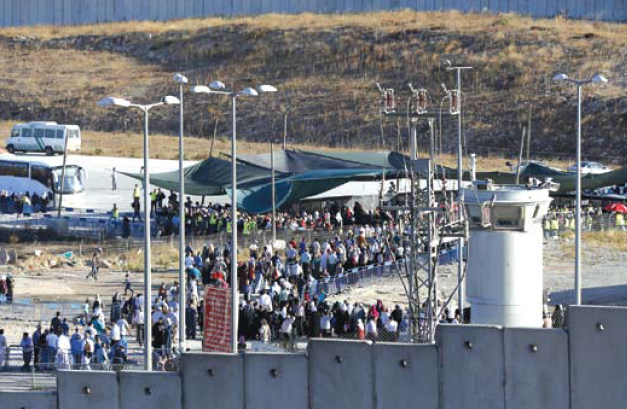 Israeli violations of international law and international humanitarian law in the occupied Palestinian territories continued during the reporting period (16 – 22 June 2016).

On 19 June 2016, Medical sources in al-Ahli Hospital in Hebron, declared that ‘Arif Shareef Jaradat (22), from Sa’ir village, east of Hebron, succumbed to his wounds. According to PCHR’s investigations, the aforementioned civilian was hit with a live bullet by Israeli forces on 04 May 2016 when the later moved into the village.  He was transferred to al-Ahli Hospital in Hebron and underwent then a surgery to remove part of the liver and Large intestine.  He was later discharged from the hospital.  On 17 June 2016, Jaradat was taken to al-Ahli Hospital in the City after his health status deteriorated.  The doctors said that they found the large intestine closed, causing adhesions.  As a result, his health status deteriorated and died.  It should be mentioned that the aforementioned civilians suffered from “Down Syndrome”.

In the Gaza Strip, on 18 June 2016, Mohammed Qreiqe’a (23) from al-Shuja’iyah neighbourhood, east of Gaza City, was wounded after a suspicious object he played with exploded from the Israeli remnants.  His left hand and hand-right finger were amputated and sustained shrapnel wounds throughout his body.  He was transferred to al-Shifa Hospital in Gaza City, where his wounds were classified as moderate.

In the context of targeting Palestinian fishermen in the Gaza Strip Sea, on 19 June 2016, Israeli forces stationed off al-Wahah shore, northwest of Beit Lahia in the northern Gaza Strip, heavily opened fire in the vicinity of Palestinian fishing boats and chased them.

On 20 June 2016, Israeli gunboats stationed off al-Soudaniyah shore, west of Jabalia, north of the Gaza Strip, opened fire at Palestinian fishing boats and chased them as well.

On the same day, Israeli gunboats stationed off Khan Younis shore in the southern Gaza Strip heavily opened fire in the vicinity of Palestinian fishing boats.  The shooting recurred in the area at approximately 19:00 and at approximately 07:30 on Tuesday, 21 June 2016.

During the reporting period, Israeli forces conducted at least 56 military incursions into Palestinian communities in the West Bank and 5 limited ones in occupied East Jerusalem and its suburbs. During these incursions, Israeli forces arrested at least 54 Palestinian civilians, including 8 children and 3 women.  Eleven of them, including 4 children and 3 women, were arrested in occupied Jerusalem.

On 21 June 2016, Israeli forces accompanied with two military bulldozers moved into Hajjaah village, east of Qalqilya.  They surrounded a hoise belonging to the family of Mohammed ‘Abdel Qader Masalahah, father of Bashar Masalhah who was killed on 08 March 2016 under the pretext of carrying out a stabbing attack in Yafa.  They started demolishing the inside walls with a hand digger while they demolished the outside walls with a bulldozer.

Palestinian Civilian wounded after playing with suspicious object from the Israeli remnants, east of al-Zaytoun neighborhood:

Demonstrations against the annexation wall and settlement activities:

Israel has imposed a tightened closure on the West Bank. During the reporting period, Israeli forces imposed additional restrictions on the movement of Palestinian civilians:

Israeli forces established (8) checkpoints all over the city.

On Thursday, 16 June 2016, Israeli forces established 2 checkpoints at the southern entrance to Hebron connecting between Yatta (al-Fahes) and the entrance to Bani Na’im village.

Israeli forces established (7) checkpoints all over the city.

On Saturday, 18 June 2016, Israeli forces established a checkpoint at the eastern entrance to al-Taibah village, northeast of Ramallah.

Israeli forces established (5) checkpoints all over the city.

On Friday, 17 June 2016, Israeli forces established 3 checkpoints at the entrance to

al-Nu’ayma village, north of Jericho, the southern entrance to the city and the crossroad of the (Dead Sea) the main street between Jericho and Jerusalem.

At approximately 20:50 on Saturday, 18 June 2016, Israeli forces established a checkpoint

At approximately 01:30 on Thursday, 21 June 2016, Israeli forces established a checkpoint at the entrance to Kafer Qadoum village, northeast of Qalqiliyah. They checked the civilian’s ID cards and their vehicles and detained Mohammed Saleh Shtaiwi (26) and released him before removing the abovementioned checkpoint.

At approximately 19:50 on Saturday, 18 June 2016, Israeli forces established a checkpoint at the entrance to Kafel Hares village, north of Salfit. They checked the civilians’ ID cards and vehicles and then detained Mahfouth Jameel Shuhada, who is soldier at the Palestinian National Security and released him before removing the checkpoint.

The Helwa Valley committee stated that the Israeli municipality crews and the Antiquities Authority as well as “Elad Settlement Association” raided the neighbourhood’s playground under the pretext of doing repairs in the infrastructure of the area. They began digging without presenting the work permit while the Israeli Special Forces were present. The committee mentioned that the residents confronted them on the same day morning and prevented them from entering the playground. After that, one of the “Elad Settlement Association” staff members insulted and cursed at the residents and threatened them. The committee doubted the main reasons of raiding the playground and the demolishing works particularly that the permit was not shown. The committee also pointed that many tunnels were dug and still present under the abovementioned playground. It emphasized that Helwa Valley playground is a land belonging to Siyam family and was rented by Madaa Creative Centre, after which it was turned into a playground. This reflects the Israeli municipality’s negligence to offer kid’s yards and playgrounds. Moreover, the Israeli authorities attempts to confiscate the playground to build a road that serves settlers in the area, as the Israeli authorities seek to connect the area of Helwa Valley with al-Rababah Valley and then to al-Thawri neighbourhood in Silwan.