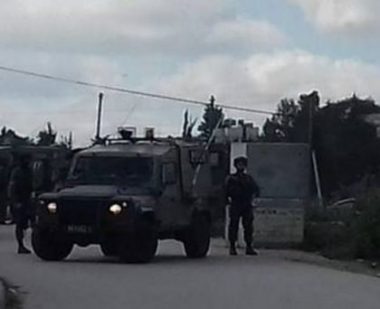 Israeli soldiers have kidnapped, Saturday, a young Palestinian man, and a young woman, in two separate incidents in Hebron, and the Qalandia terminal north of occupied Jerusalem, allegedly for carrying knives.

Israeli military sources in Hebron, in the southern part of the occupied West Bank, said the soldiers detained a young Palestinian man near the Ibrahimi Mosque in the city, for “carrying a knife.”

The sources claimed that the young man “confessed under interrogation” that he intended to carry out a stabbing attack against the soldiers “to avenge the death of his cousin” who was killed by the army nearly six months ago.

In addition, the army also kidnapped a young woman while trying to cross the Qalandia military terminal, north of Jerusalem, reportedly for “locating a knife in her bag.”

The woman was cuffed and blindfolded before the soldiers took her to an interrogation facility in Jerusalem.