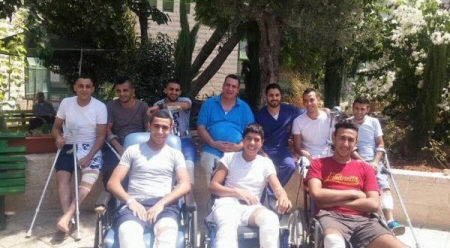 A recent report, published by Haaretz’s Amira Hass, claims that a large number of Palestinians are being targeted with live fire around the knee by soldiers, perhaps leaving them disabled for life, and reminds of the many others who have been injured in a similar way, during earlier raids.

The report describes the suffering of wounded youth, in the moment of getting shot or just following, as well as the physical suffering inflicted by shattered bones and “lucky” hits in the muscle, in several locations across the West Bank, including Deheisheh refugee camp and Al-Fawwar.

There are stories circulating through the camps that, during questioning, over the phone, or during nightly visits to houses in the area, Israeli officer Captain Nidal tells young people that there will be no martyrs but “all of you will end up on crutches.” Or, in another variation, “We’ll make you all disabled.”

In Hebron and Deheisheh, committees have been set up to care for the wounded. In many places, there’s a growing realization that the army is intensifying its use of live fire in confrontations with unarmed stone-throwers, and that the wounds inflicted are deliberately more severe.

It is said that there must be more than 100 people across the West Bank, including many minors, who have been crippled by the Israeli army over the last year. But, there is still no exchange of information or collation of data to confirm the seeming trend, according to the PNN.