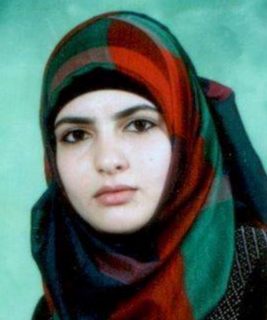 Israeli soldiers killed, Friday, a Palestinian teenage girl after alleging she deliberately rammed her car into an Israeli settlers’ vehicle, east Hebron, in the southern part of the occupied West Bank. Eyewitnesses said she lost control of her car and crashed into the Israeli car.

The soldiers fired many rounds of live ammunition at the car, especially into the windshield, killing Majd Abdullah al-Khdour (al-Manasra), 19, after wounding her multiple times in the upper parts of her body.  She is a mother is a mother of a toddler girl by the name of Hadeel.

The slain teen is from Bani Neim town, east of Hebron. She was killed on a bypass road, in the Baq’a area, at the entrance Keryat Arba’ Israeli colony in Hebron.

Palestinian medics rushed to the scene, but the soldiers prevented them from approaching al-Khdour, and closed the entire area after declaring it a closed military zone.

Although the army is alleging she was shot dead after “deliberately ramming Israelis,” eyewitnesses said the incident appeared to be a traffic accident after she lost control of her car, and crashed into settlers’ vehicle.

Israeli Ynetnews claimed al-Khdour first “attempted a car-ramming attack, but failed to do so, and instead struck another car,” injuring an Israeli man and his wife.

The two were treated by the Israeli Magen David Adom first responders, before being transferred to Shaare Tzedek Medical Center in Jerusalem.