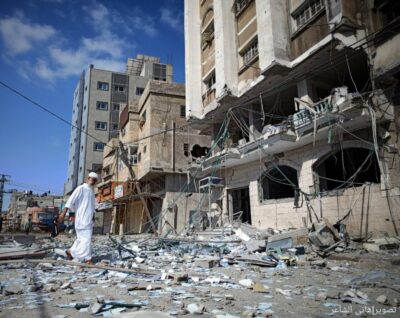 Updated: The Israeli army continued, on Friday at dawn, the bombardment and shelling targeting various parts of the Gaza Strip, killing at least ten more Palestinians, including three women, and wounding more than 50 others.

The soldiers fired dozens of missiles and shells into various areas of the Gaza Strip, especially in the Sheja’eyya neighborhood, east of Gaza city, killing three women, and wounding dozens of Palestinians.

Also at dawn, medics and rescue teams recovered the corpses of two Palestinians under the rubber of a bombarded home, west of Beit Lahia, in northern Gaza, bringing the number of Palestinians killed in that home to four.

In addition, the WAFA News Agency said the corpses of two Palestinians were also found under the rubble of a bombarded home in the al-Atatra area, northwest of Beit Lahia, in northern Gaza.

Dozens of Palestinians were injured in the bombardment, and many families were rendered homeless.

According to the Health Ministry in Gaza, at least 119 Palestinians, including 27 children and 11 women, have been killed by Israeli missiles and shells, and more than 830 have been injured since Israel began its offensive on Gaza four days ago.

It is worth mentioning that, on Friday morning, the army fired many artillery shells into the eastern areas of Khan Younis, in the southern part of the Gaza strip, in addition to al-Maghazi and Deir al-Balah, in central Gaza, in addition to a Police station in the Zeitoun neighborhood in Gaza city.

The Shehab News agency said a Palestinian, identified as Mohammad Khaled at-Tawashi, 27, was killed in an Israeli bombardment in Deir al-Balah.

The Israeli army also fired dozens of shells into neighborhoods and farmlands in northern Gaza, in addition to Khan Younis and Rafah, in the southern part of the coastal region.

The Israeli army said 160 of its fighter jets participated in the bombing of 150 sites across the Gaza strip overnight.

Palestinian armed resistance groups said they fired dozens of shells into Israeli areas in retaliation to the ongoing war on Gaza.

The al-Qassam Brigades, the armed wing o Hamas said it fired about 100 shells into Asqalan.

The al-Quds Brigades, the armed wing of the Islamic Jihad, said it fired many missiles into Netivot, Sderot, Asqalan, Ashdod, Tel Aviv, and several other areas.

Abu Obaida, the spokesperson of the al-Qassam Brigades, said that any ground invasion into Gaza “will just be an opportunity for the resistance to kill or capture more Israeli soldiers.”