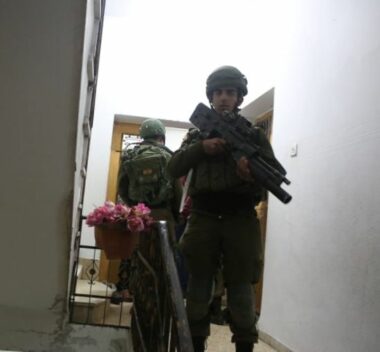 The Israeli army shot and injured a Palestinian journalist and a civilian, on Thursday, during intense confrontations with Palestinian youths resisting the army invasion in Hebron, in the southern occupied West Bank.

Soldiers fired rubber-coated steel rounds and teargas canisters at the youths, injuring photojournalist for the Palestinian Wafa News Agency, Mashhour Al-Wahwah. According to Wafa, the Israeli military invaded the village of Kharsa, southwest of Hebron, where they were met by Palestinian youth that stood near the entrance to their village to try to repel the invading army by throwing stones and shouting at the soldiers to leave.

The Israeli military fired rubber-coated steel bullets and tear gas canisters toward the crowd. As is their usual practice, they fired the tear gas canisters directly at people, instead of into the air as is required by international law.

The soldiers fired a canister directly at journalist al-Wahwah, injuring him on the foot. Another civilian was hit in the neck with a rubber-coated steel bullet. Both were treated on the scene by the Palestinian Red Crescent Society (PRCS).

Journalists and other media professionals run a high risk of being subjected to arbitrary detention for alleged security reasons. This is where the distinction between ” war correspondents ” (Article 4 A (4) of the Third Geneva Convention) and ” journalists ” (Article 79 of Additional Protocol I) matters. Both are recognized as civilians, but only war correspondents are entitled to prisoner-of-war status. War correspondents are formally authorized to accompany the armed forces. By virtue of this close relationship, upon capture, they are accorded the same legal status as members of the armed forces. War correspondents thus benefit from the protections of the Third Geneva Convention as supplemented by Additional Protocol I and customary international law.

Inasmuch as they are civilians, journalists are protected under international humanitarian law against direct attacks unless and for such time as they take a direct part in hostilities. Violations of this rule constitute a grave breach of the Geneva Conventions and Additional Protocol I. What is more, intentionally directing an attack against a civilian – whether in an international or in a non-international armed conflict – also amounts to a war crime under the Rome Statute of the International Criminal Court.

Israeli soldiers abducted, on Friday morning, three former political prisoners and assaulted two of them in Hebron, in the southern part of the occupied West Bank.

The Palestinian Prisoners Society (PPS) has reported that the soldiers abducted Jalal Jabarin, after storming and ransacking his home in Sa’ir town, northeast of Hebron.

Eyewitnesses said the soldiers repeatedly assaulted the two Palestinians while searching their homes, and while dragging them to their vehicles.