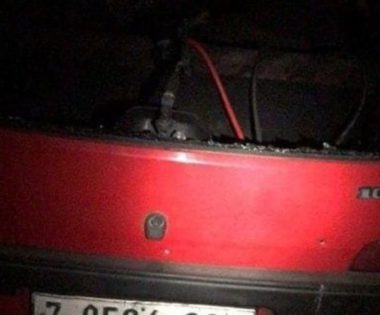 Media sources said the two Palestinians, Ra’ed Hashem Hamdan, 21, and Zeid Emad Nouri, 20, were killed after the soldiers, who were invading Nablus, opened fire at their car, killing them instantly.

The Palestinian Red Crescent Society (PRCS) said its medics rushed to the scene, but the soldiers stopped them, and refused to allow them to reach the two Palestinians, before the army moved their corpses to Huwwara military base, south of Nablus.

It added that the soldiers handed the bodies of the two Palestinians to its medics, on Wednesday morning.

The PRCS added that the soldiers also opened fire at dozens of Palestinians, protesting the death of the two young men, and shot at least 12 with rubber-coated steel bullets, one with shrapnel, in addition to at least fifteen who suffered the effects of teargas inhalation.

The Israeli army claimed that a Molotov cocktail was reportedly hurled at the soldiers from a speeding car near Joseph’s Tomb area, in Nablus, before the soldiers opened fire, killing the two Palestinians.

It is worth mentioning that the soldiers invaded and ransacked many homes and occupied rooftops to use them as firing posts and military towers.

In related news, the soldiers killed, on Tuesday at night, a young Palestinian man, identified as Omar Abu Laila, 19, who is suspected of killing two Israeli, last Sunday; the Palestinian was killed after the soldiers surrounded a home, and exchanged fire with him in Abwein village, near the central West Bank city of Ramallah.

Also in Ramallah the soldiers invaded Beit Sira village, west of the city, and shot a young man, identified as Abdullah Mohammad Abu Safiyya, 21, with two live rounds in the leg and shoulder.