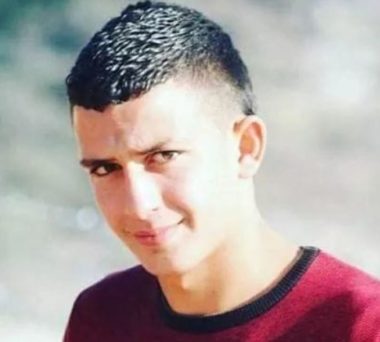 Israeli soldiers killed, on Tuesday at night, a young Palestinian man, who is suspected of killing two Israeli, last Sunday; the Palestinian was killed after the soldiers surrounded a home, and exchanged fire with him in Abwein village, near the central West Bank city of Ramallah.

The Israeli army said that “it received information about the location of the Palestinian”, identified as Omar Abu Laila, 19, before the soldiers surrounded the property and exchanged fire with him, reportedly after he refused to surrender.

Israeli daily Haaretz has reported that Abu Laila is suspected of killing Rabbi Ahiad Ettinger and Staff Sgt. Gal Keidan, after he reportedly stabbed them on March 17, 2019.

After the incident, the Israeli army invaded his home, and many homes of his relatives, conducted very violent searches, and took measurements of his home to demolish it at a later stage, in an act of collective punishment against his family.

The Palestinian Red Crescent Society (PRCS) said its medics provided treatment to at least nine Palestinians, including two who were shot with live fire, in addition to many others who suffered the effects of teargas inhalation. It is worth mentioning that Abu Laila left a handwritten message to his family asking them to forgive him, and not be sad about his death.

He also wrote names of a few Palestinians who loaned him some money, mounting in total to only about 50 Israeli shekels, and asked his family to repay his dept.

It is worth mentioning that the Palestinian was not known to be involved in politics, or a member of any armed resistance group.

After two days of man-hunting, Israeli occupation forces shot and killed 19-year-old Omar Abu Laila, the alleged executor of the Salfit operation at the junction of Ariel and the intersection of Gite Avisar, on Tuesday night.

Hebrew sources reported, according to Days of Palestine, that Israeli forces surrounded a building where Omar Abu-Lila was staying and shot him dead, as he reportedly resisted his detention.

Since 1967, when Israel occupied the West Bank and Jerusalem, more than 600,000 Israeli settlers have come to live in the illegal settlement built there.

The international community considers the establishment of Israeli settlements in the occupied territories to be illegal under international law, in violation of the Fourth Geneva Convention of 1949, which states: “The Occupying Power shall not deport or transfer parts of its own civilian population into the territory it occupies.”

Israeli settlers, under the protection of heavily armed forces, routinely attack Palestinians in the territories, especially in the West Bank and East Jerusalem, demolishing their homes and vandalizing their properties.