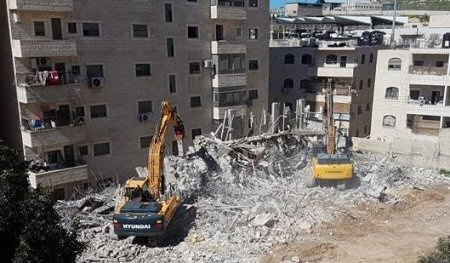 Israeli bulldozers, today, demolished an under-construction building belonging to a Palestinian school in the Shu’fat refugee camp of occupied East Jerusalem, on Tuesday.

Dozens of Israeli soldiers escorted bulldozers into the refugee camp, surrounded the al-Razi School and went up rooftops of nearby buildings as drones flew overhead; Israeli bulldozers then began to demolish the school’s building.

Muhammad Alqam, owner of the school building, told Ma’an News Agency that Israeli authorities had issued a demolition order against the building last November, pointing out that he had headed to the Israeli Jerusalem Municipality, before the construction of the building, to issue necessary permits. However, he was told that the area belongs to the United Nations Agency for Palestine Refugees (UNRWA.)

Principal of the school, Saleh Alqam, pointed out that the demolition was carried out without prior notice.

He added that 400 Palestinian students had registered for the 2019/2020 school year in the new building, which was supposed to serve kindergarten and elementary students. However, after the demolition, these students now have no place to go.

School was suspended, for Tuesday, for 1500 students of all stages who attend the al-Razi School.

According to Daniel Seidemann of the NGO Terrestrial Jerusalem, “Since 1967, the government of Israel has directly engaged in the construction of 55,000 units for Israelis in East Jerusalem; in contrast, fewer than 600 units have been built for Palestinians in East Jerusalem, the last of which were built 40 years ago. So much for (Jerusalem Mayor Nir) Barkat’s claim ‘we build for everyone.'”