Army Orders Demolition Of One Home, Halt Construction Of Another, Near Hebron 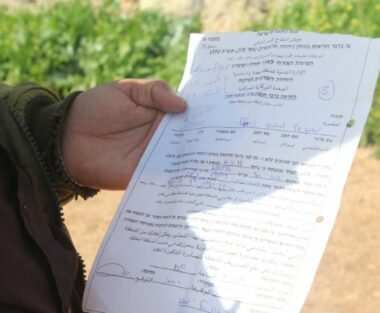 Israeli soldiers invaded, Monday, the at-Tiwana village, east of Yatta town, south of Hebron, in the southern part of the occupied West Bank, and handed a demolition order targeting one home, in addition to another order for halting the construction of another property.

Media sources in Hebron said several army jeeps invaded the at-Tiwana village, before storming the home of Mahmoud Abu Arram, and handed him a demolition order for his property.

They added that ten family members live in the property, which is estimated of about 65 square/meters, and was built on Mahmoud’s land.

In addition, the soldiers handed Mos’ab Mohammad Rib’ey a warrant ordering him to halt the constriction of his home, in addition to handing a similar order to Mohammad Issa Rib’ey who is constructing a barn.

Mohammad Rib’ey, the head of the at-Tiwana village council, said the Palestinians are building on their own lands, and that their constructions are licensed by the council. However, Israel continues its efforts to force the Palestinians out of their lands so that it can build and expand its illegal colonies.

He added that Israel is currently trying to expand the illegal colonies of Avigal, Ma’on, Havat Ma’on and Karmiel, which were all built on illegally confiscated private Palestinian lands, in direct violation of International Law.

Rib’ey voiced an appeal to national, legal, regional, and international human rights groups to intervene and stop the seriously escalating Israeli violations against the Palestinians, their homes, lands, and holy sites in several parts of occupied Palestine, including Jerusalem.

He said that these violations are taking place while the illegal colonialist settlers continue to escalate their assaults against the Palestinians and their lands, including repeated attacks against farmers and shepherds in Masafer Yatta area.

Earlier Monday, an Israeli court in occupied Jerusalem rejected an appeal against orders for the demolition of a mosque in Silwan town, south of the Al-Aqsa Mosque in the city.