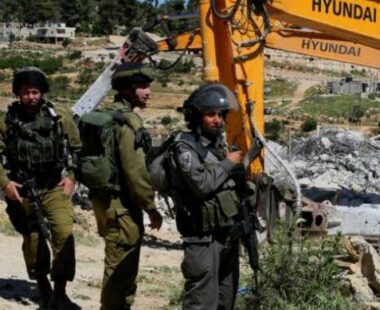 Israeli soldiers invaded, Sunday, Masafer Yatta area, south of the southern West Bank city of Hebron, and handed orders for the demolition of a school and an under-construction mosque, in the Um ad-Daraj Bedouin community.

Local sources said the soldiers ordered the demotion of an under-construction mosque in the community under the pretext of being built without a permit from the Civil Administrative office.

In addition, Yousef al-Basayta, the head of Um Qissa primary school in Masafer Yatta said the soldiers also handed an order for the demolition of an under-construction local school that is meant to provide basic education to 50 students.

The small school was being built by the Palestinian Education Ministry to provide education to students from Um Qissa, al-Abadiya, and as-Sarj communities.

In related news, the soldiers prevented workers of the Hebron Construction Committee from conducting maintenance work in the Ibrahimi Mosque in Hebron city.

The mosque and the school are in Area C of the occupied West Bank, under full Israeli control, where the occupation authorities constantly demolish Palestinian homes and structures.

The army always claims the structures, including those in Hebron and the Jordan Valley of the occupied West Bank are built without permits; however, such permits are rarely issued for the Palestinians as Israel prohibits development in Area C (more than %60 of the West Bank) but continues to build and expand its illegal colonies in direct violation of International Law, the Fourth Geneva Convention and various United Nations and Security Council resolutions.