Israeli Colonists Injure A Palestinian Child While Trying To Kidnap Her 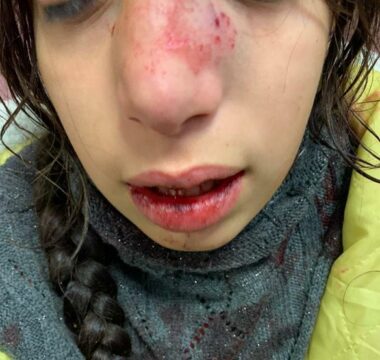 Palestinian medical sources have reported, Sunday, that a child was injured mainly in her face and head after a number of illegal Israeli colonists assaulted her while trying to kidnap her, when they invaded a village near the northern West Bank city of Nablus and attacked homes.

He added that the colonists also assaulted and injured Hala Mashhour Mohammad al-Qet, 11, as she was trying to leave her uncle’s nearby residence.

Hala said that she went to her uncle’s house to study with her cousins, and added that the colonists assaulted her the moment she opened the door and was about to leave the property. The colonists attacked the child, and stuck her in the face and head with rocks before attempting to kidnap her, but her uncle and many Palestinians rushed to her aid and managed to free her from them.

The child was then moved to a hospital in Nablus city to receive treatment for her physical wounds and psychological trauma.

The colonists fled the village and headed to Yitzhar colony after the locals pushed them away, and less than an hour later, the army invaded the Palestinian community.