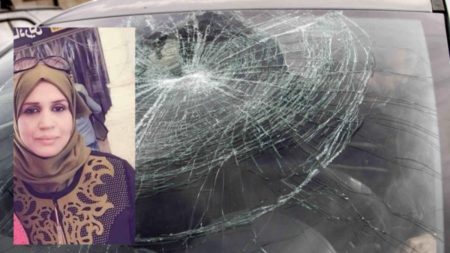 The Israeli army, on Sunday, admitted that the killing of a Palestinian mother of 8, Aisha Mohammad al-Rabi, 47, by an Israeli settler in the occupied West Bank, last October, was a “hostile attack on nationalist grounds.”

Last year, Israeli prosecutors issued an indictment against the Israeli settler suspected of killing of Rabi by hurling a massive rock at the windshield of her car as she was traveling with her husband and daughter, in the occupied West Bank.

Aisha was killed, and her husband, Yacoub, was injured, on October 12, 2018, after Israeli settlers hurled rocks at their vehicle near the Zaatara checkpoint in southern Nablus in the northern West Bank.

Al Ray further notes that illegal Israeli settlers increasingly escalate their attacks against Palestinian people in the occupied West Bank and Jerusalem, under the protection of the Israeli occupation forces.

|Aisha al-Rabi’s Daughter during Funeral: ‘Is mom here, yet?’|