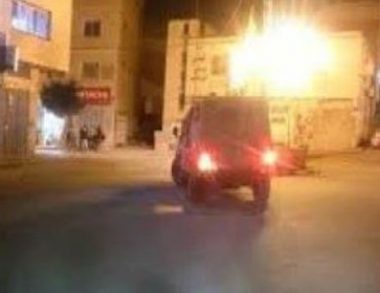 Update: The Palestinian Prisoners Society (PPS) in Bethlehem, has reported that the number of Palestinians, abducted by Israeli soldiers, at dawn Wednesday, in the West Bank governorate of Bethlehem, has arrived to nine, while one of them was shot and seriously wounded by army fire.

It stated that the soldiers abducted Mo’tasem Raqaban, Ahmad Issa Sarrar, and Bara’ Jamil Abu ‘Alia and Ahmad Sar’awi, from their homes in Deheishe refugee camp, south of Bethlehem.

It is also mentioning that the soldiers shot al-Atrash with three live rounds in his back and shoulder, seriously wounding him, before local medics moved him to Beit Jala governmental hospital.

Israeli soldiers invaded, on Wednesday at dawn, the Deheishe refugee camp, south of the West Bank city of Bethlehem, and clashed with local youths, before shooting and seriously injuring a young man, and abducted eight Palestinians during violent searches of homes, in Bethlehem district, including three in Deheishe.

The soldiers fired many live rounds, wounding a young man, identified as Akram Omran al-Atrash, 23, with three live rounds in his back and shoulder, seriously wounding him, before local medics moved him to Beit Jala governmental hospital.

His cousin, lawyer Farid al-Atrash, said the hospital is currently conducting all needed arrangements to move him to Hadassah Hospital, in Jerusalem, due to the seriousness of his condition.