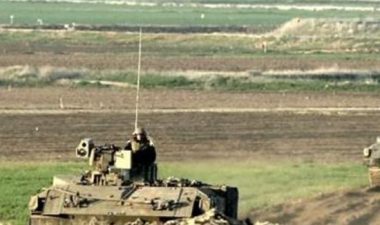 On Wednesday, the WAFA Palestinian News Agency has reported that two armored bulldozers, three tanks and bulldozers, stationed at a military base across the border fence, invaded Palestinian agricultural lands, east of Jabalia, in the northern part of the coastal region, while Israeli planes also sprayed lands with toxins.

The soldiers advanced approximately 300 meters into the lands, and started uprooting them, while firing many live rounds, forcing the Palestinians away, while military drones flew overhead.

In addition, Israeli aircraft sprayed many areas of agricultural lands with toxins, in the eastern part of the besieged Gaza Strip, for the second consecutive day.

The lands are planted with wheat, barley, Okra, melons, and several other types of plants that provided livelihood to many families.

The army considers border areas in the besieged Gaza Strip off-limits to the Palestinians, including what it calls the “buffer zone”.

This includes large areas of lands, while the agricultural lands that are close to the fence became a frequent target for invasions and bulldozing, and the army also repeatedly opens fire at the Palestinians while working on their lands.
In related news, Israeli navy ships fired live rounds at a Palestinian fishing boats, in Gaza territorial waters, close to the shore, in northern Gaza.