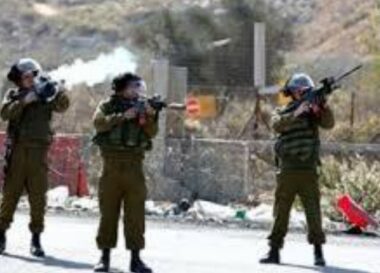 Israeli soldiers shot, Friday, a Palestinian child near the northern entrance of Qalqilia city, in the northern part of the occupied West Bank.

Media sources said dozens of Palestinians marched in the area, condemning the ongoing Israeli violations before the soldiers attacked them with live rounds, rubber-coated steel bullets, and gas bombs.

They added that one child was shot with a rubber-coated steel bullet in the leg and was rushed to a hospital where his condition was described as moderate.

Palestinian medics also provided treatment to many residents who suffered the effects of tear gas inhalation.

In related news, the soldiers injured six Palestinians during the weekly procession against the illegal Annexation Wall and colonies in Kufur Qaddoum, east of Qalqilia.

In occupied Jerusalem, the soldiers abducted a Palestinian child after stopping him in a neighborhood in the Old City and took him to an interrogation facility.