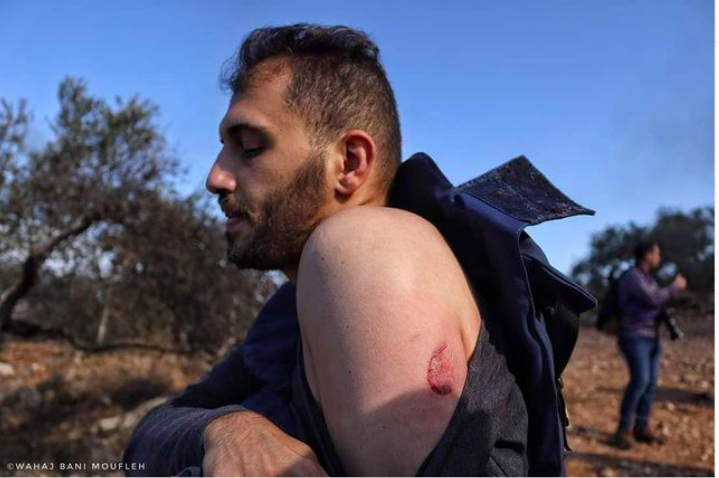 Israeli soldiers injured, Friday, dozens of Palestinians, including two journalists, during the weekly processions against the illegal colonialist activities, in Beita and Beit Dajan, near the northern West Bank city of Nablus.

Ahmad Jibril, the head of the Emergency Department of the Nablus branch of the Palestinian Red Crescent Society (PRCS) said the soldiers fired many live rounds, rubber-coated steel bullets, gas bombs, and concussion grenades, at the protesters on their lands.

Jibril added that the soldiers shot nineteen Palestinians with rubber-coated steel bullets, including a correspondent with the Palestinian TV, identified as Bakr Abdul-Haq, who was shot in the shoulder.

He added that at least three Palestinians, including one journalist, suffered cuts and bruises, in addition to dozens who suffered the effects of tear gas inhalation.

Eyewitnesses said the soldiers deliberately targeted medical teams and reporters during the processions.

The soldiers attacked the protesters with several live rounds, in addition to gas bombs, concussion grenades, and rubber-coated steel bullets.

The protests have been ongoing for the past several months since Israeli colonizers occupied Sbeih Mountain, in Beita town, and installed an illegal outpost dubbed Givat Avitar, on stolen Palestinian lands.

Updated From:
Army Shoots, Injures Two Journalists, Causes Many to Suffocate in Beita and Beit Dajan
Nov 26, 2021 at 19:36

Two Palestinian journalists were shot by Israeli forces, Friday, as they were covering the weekly protest in Beita town, southeast of Nablus in the northern occupied West Bank, according to local sources.

Israeli forces opened fire with rubber-coated steel rounds and tear gas canisters at the non-violent demonstrators who gathered in rejection of the ongoing Israeli colonization of Palestine.