Israel Forces A Palestinian To Demolish His Facility In Jerusalem 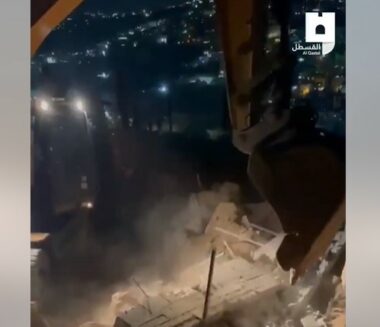 On Friday, the Israeli authorities in the occupied capital, Jerusalem, forced a Palestinian to demolish his commercial structure and its surrounding walls.

The Wall & Colonization Resistance Commission has confirmed several army jeeps invaded Jabal al-Mokabber town, in Jerusalem, and handed a Palestinian an order forcing him to demolish his structures, for being built without a permit from the city.

It added that the Palestinian, Adham Ali Ja’abis, was forced to demolish his commercial structure and its surrounding walls.

The Palestinian resorted to demolishing his structures at his expense to avoid the excessively high fines and fees, in addition to the demolition costs, if the City Council carried the demolitions out using its workers and equipment.

While Israel continues to deny the Palestinians construction permits in occupied Jerusalem, and several parts of Area C of the occupied West Bank, it continues its policies of the illegal construction and expansion of its colonies in direct violation of International Law, the Fourth Geneva Convention, in addition to various United Nations and Security Council resolutions.

It is worth mentioning that last year, Israel demolished 856 structures, displacing 1014 Palestinians, in the occupied West Bank, the Israeli Committee Against House Demolitions (ICAHD) said.

ICAHD stated that the demolitions also directed affected 5615 Palestinians and added that 2586 structures were also demolished in the Negev.