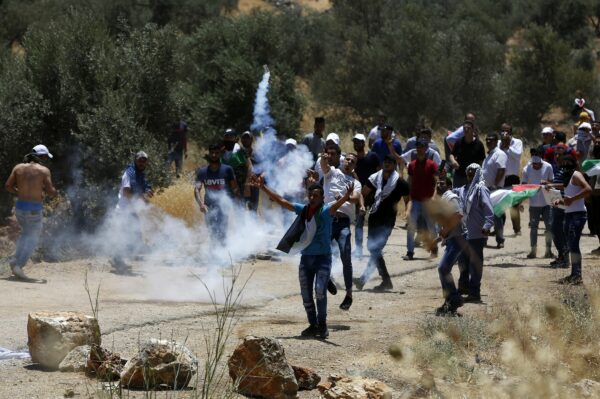 Israeli forces shot, on Monday and Tuesday, two young Palestinian men at the entrance of the al-Fawwar refugee camp, south of Hebron in the southern occupied West Bank and caused dozens to suffocate on tear gas.

Security sources told the Palestinian News & Information Agency (WAFA) that Israeli forces shot and injured a young Palestinian man with a live round in the leg, when youths protested the army’s closing of the metal gate between Dura town and the al-Fawwar refugee camp.

The young man suffered a moderate live bullet wound and was transferred to hospital for urgent medical treatment.

On Monday, soldiers closed the metal gate at the entrance to the refugee camp, obstructing the Palestinian people on their way into and out of the town.

WAFA correspondent reported that Israeli soldiers shot one man and caused dozens to suffer the effects of tear gas inhalation, on Monday, during a rally, held in solidarity with hunger-striking detainee Hisham Abu Hawwash.

According to local activist Mohammed Awad, soldiers also opened live fire and shot one young man whose condition and identity were unknown at the time of this report.