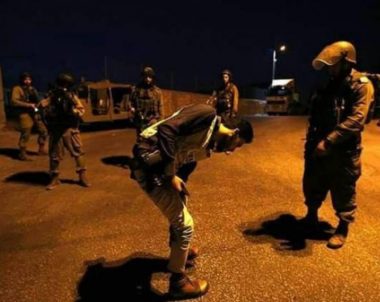 Updated: The Palestinian Prisoners’ Society (PPS) has reported that Israeli soldiers abducted, on Monday at dawn, ten Palestinians from their homes in several parts of the occupied West Bank, including Jerusalem.

The soldiers invaded and searched many homes, especially in Bethlehem, Ramallah, Nablus and Qalqilia, and interrogated many Palestinians while inspecting their ID cards.

In addition, the soldiers stormed a Printshop, owned by Ghassan Thouqan, a political prisoner held in Israeli jails, and his son Moath, in Balata refugee camp, in Nablus, and confiscated its machines and equipment.

The army closed the printshop and posted a note accusing the owners of incitement, and of “aiding terrorism.”

In occupied Jerusalem, the soldiers abducted Zoheir Khader Rajabi, from his home in Batn al-Hawa neighborhood in Silwan town, south of the Al-Aqsa Mosque.

The Palestinian has been repeatedly abducted and interrogated by the military and the police for protesting the illegal Israeli takeover of Palestinian homes in Silwan, to house illegal colonialist settlers.

The army  also invaded the home of Mohammad Tareq Dar Yousef, 17, who was killed on July 26th, and handed his family a demolition order targeting their home.

It is worth mentioning that Mohammad was killed in Adam illegal Israeli colony, after he reportedly stabbed three colonialist settlers, killing one identified as Yotam Ovadia, 31,