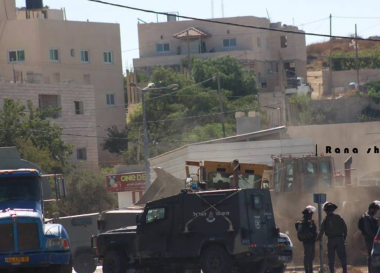 Several Israeli military jeeps and bulldozers invaded, Sunday, Palestinian lands in Kharsa area, south of Doura, in the southern West Bank governorate of Hebron, and started bulldozing them to install a military tower.

No’man Amro, the head of Doura Town Council, said the soldiers are bulldozing lands close to a local school for girls, in an area that is also overpopulated, adding that this tower would place the residents’ lives at risk.

Abdul-Hadi Hantash, an expert maps and Israel’s colonies files, said the targeted area links between all villages, east of Doura, in addition to the ath-Thaheriyya town and all western roads.

Also in Hebron, the soldiers invaded the towns of Surif and ath-Thaheriyya, and abducted two Palestinians.