Army To Demolish A Three-Story Palestinian Home In Bethlehem 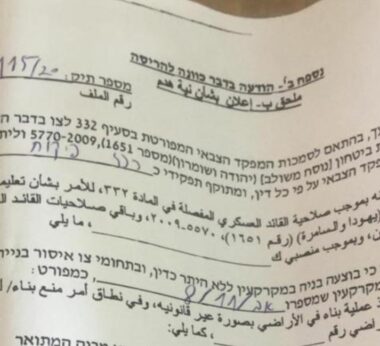 The home’s owner, Ayman al-Heeh, stated that the soldiers invaded the village, during morning hours Thursday, and delivered the demolition order.

He added that he has one week to file an appeal with the “Civil Administration Office,” and to file for a construction permit, or else the property will be leveled. Such permit applications are constantly denied  in addition to their high costs.

Al-Heeh stated that his building is 300 square meters, constructed on his privately owned land, and added that the area is subject to frequent Israeli violations, including the demolition of homes and structures.

Israel imposes severe restrictions on Palestinian constructions in Area C (more than %60) of the occupied West Bank, in addition to constantly demolishing homes and structures, while at the same time continues to build it segregated colonies in the occupied Palestinian territory, including Jerusalem, in direct violation of International Law.

On Thursday at dawn, the soldiers invaded the Palestinian village of Beit Sira, west of the central West Bank city of Ramallah, and demolished an under-construction home.