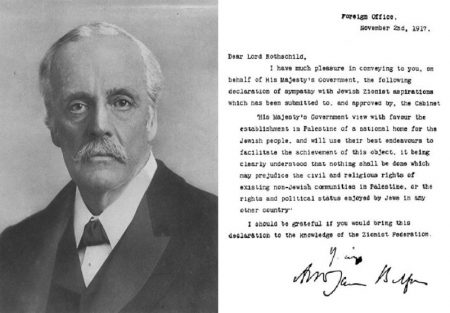 The extremists, who held their activities under heavy police protection, were marking the last day of the Jewish “Sukkot” holiday, according to WAFA.

The site is revered by Muslims as their 3rd holiest site, while Jews claim that the mosque is placed at the site of two Jewish temples which were destroyed in ancient times.

Meanwhile on Monday, Palestinian officials and activists decided to hold year-long activities, in Palestine and around the world, to mark 100 years since the Balfour Declaration.

November 2, 1917, is the date marking 100 years since then British foreign secretary, Arthur Balfour, had promised, in a letter to Zionist leaders, a homeland for the Jews in Palestine. The letter triggered the century-long Palestinian-Israeli conflict, and many other wars in the Middle East.

“The Balfour Declaration is in its essence a colonialist project,” Taysir Khalid, member of the executive committee of the Palestine Liberation Organization (PLO), told the meeting held at the PLO’s Ramallah headquarters.

He said that the activities will continue until November 2, 2017, with a goal “to remind the world, and particularly Britain, that they should face their historic responsibility and to atone for the crime the British government had committed against the Palestinian people.