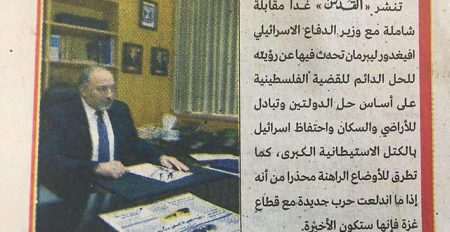 In a controversial move, the leading Palestinian newspaper, Al-Quds, has conducted a long interview with Israeli Minister of Defense Avigdor Lieberman,  raising sharp criticism within the Palestinian community who called the interview an act of “normalizing occupation”.

In the interview, Lieberman said, according to the PNN, that Israel is ready to lift the seige on Gaza, under the condition that Hamas ditches its military program. He also threatened that if there would be a war on Gaza, and that it will be the last, because it will be collateral.

Lieberman added that, if Hamas stops digging tunnels and launching rockets, Israel will help build both an airport and a seaport.

Editor’s note: Palestine has no official military force to speak of. Default “Hamas rockets” are not equipped with a guidance system, and are typically constructed of little more than a hollow tube stuffed full of dynamite, typically falling onto unpopulated regions of the Negev Desert.

During the war on Lebanon in 2006, Israel had shelled the Gaza International Airport, causing it complete destruction.

According to UNRWA figures, the last Israeli war on Gaza had killed at least 2,000 Palestinians, 500 of them children, and left 11,000 wounded. On the Israeli side, 70 soldiers (three of them settlers) were killed.

Lieberman, during the interview, also cited all the wars in Yemen, Lybia, Syria, and Iraq, to say that Israel is “the only democracy in the Middle East”, and that its intentions have been “misunderstood”.

As for negotiations with the Palestinian Authority, Lieberman said that he supports the two-state solution, but is not prepared to give up occupied land in exchange for peace.