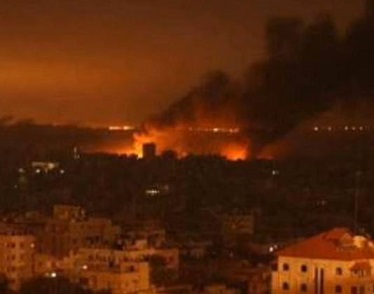 The Israeli Force fired, on Monday morning, at least one missile into a site, rub by the Al-Qassam Brigades the armed wing of Hamas, east of Beit Hanoun, in the northern part of the Gaza Strip, after a shell was reportedly fired from Gaza.

Israeli military sources said the Air Force fired targeted infrastructure run by Hamas in the coastal region, and held the movement responsible for the escalation.

The Israeli bombardment of the Hamas-run facility caused property damage.

The sources added that the shell from Gaza “was apparently targeting Sha’ar HaNegev Regional Council, and caused the Code Red missile detection system to sound.

Israeli Ynet News said the shell, that was reportedly fired from Gaza, did not fall in an Israeli area, and that it most likely landed in in the Gaza Strip.

The Ynet added that the army held Hamas solely responsible for the attack, and any escalations, “because it controls the Gaza Strip.”