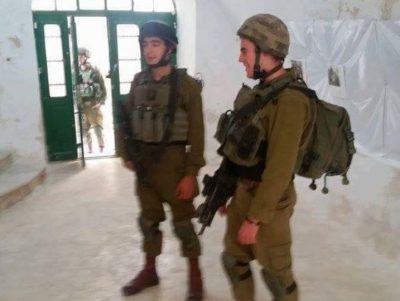 Several Israeli soldiers invaded, Sunday, the office of the Palestinian Committee against the Annexation Wall and Colonies, in Hebron’s Old city, in the southern part of the occupied West Bank.

Younis ‘Arar, the head of the popular committee in Hebron, said the soldiers invaded the building, and were demanding the people inside the building to remove posters and pictures that expose the ongoing Israeli military violations, and the constant attacks carried out by extremist Israeli colonists in the city.

‘Arar added that the soldiers did not search the building, or cause any damage, and withdrew shortly after invading it.

The Popular Committee denounced the invasion, and called on various regional and international legal and human rights groups to intervene, and end the escalating Israeli violations. He added that the soldiers recently broke into offices of several nongovernmental organizations, in addition to a number of private and governmental institutions.

On Sunday at dawn, the soldiers invaded several districts in the occupied West Bank, searched many homes and kidnapped at least six Palestinians. The soldiers also confiscated large sums of cash in Qalqilia and Hebron, and kidnapped twenty Palestinians in East Jerusalem.